A 18-year-old ethical hacker got arrested in Hungary

I am writing this blog post because I haven’t found any news in the international media about the recent technology-related scandal in Hungary, and I want to draw attention to the topic while raising awareness of the importance of information security and proper crisis management as well as praising the power of social networks. So let’s see first what kind of craziness has just happened in Hungary!

T-Systems Hungary (which is owned by Magyar Telekom Nyrt. which is owned by Deutsche Telekom AG) developed an online shop for tickets and monthly passes for the public transportation company of Budapest (BKK Zrt.) that was made available for the masses on 14th July. 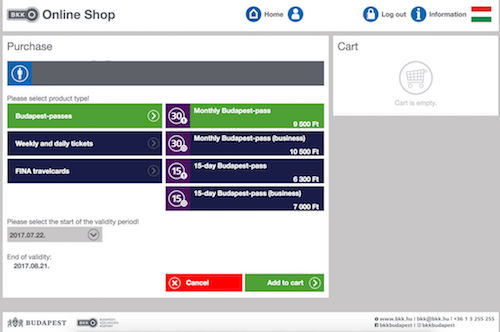 The digital tickets you buy from the webshop can be presented on your smart phone to the ticket controller personnel until the fully electronic ticket system (RIGO) is deployed in the capital (it is expected at the end of 2018). This is great news and I feel that we are finally reaching the technology level of the 21st century!

Unfortunately the devil is in the details, so during the first week of operation many-many severe security vulnerabilities and usability problems have been discovered. Here they are without the need for completeness:

All in all, this website is a complete parody of information security, a real counterexample of responsible data handling. This level of negligence just isn’t acceptable in 2017 when half of our life is online. Moreover, tens of thousands of people could possibly use the application so the impact of its security is rather big.

But this isn’t the worst part of the story. The real horror will just come!

BKK Zrt. denied that any security vulnerability has been exploited:

said Mr. Kálmán Dabóczi, CEO of the company (the above text is a paraphrase). However, he admitted that there were several (cyber)attacks and trolling attempts against the website. Mr. Balázs Szeneczey, vice mayor of Budapest announced that T-System Hungary Zrt. has already reported an attacker to the police.

Then it came out that the aforementioned “attacker” is a 18-year-old kid almost without any computer education. He was the one who discovered that tickets can be bought for any price you want and who immediately reported the bug to the public transportation company, and four hours later to the most popular online news site, index.hu. The next day, the young “hacker” was arrested by the police early in the morning.

Later that day, BKK Zrt. and T-Systems Zrt. made a common announcement in which they stated that

The event “which reached a certain level” had to be reported to the police because of a strict internal policy of the developer company.

They added that it is very sad to hear that the suspect is such a young student who seemed to have good intentions based on his interviews in the media.

This is just insane. Arresting an ethical hacker for helping a company out? I’ll write more about this topic a bit later, but let’s just continue the original story with the fun part!

The arrest of the young ethical hacker hit the news immediately and a mass hysteria soon broke out throughout Hungary. People wanted to take revenge on BKK and T-Systems so they started to rate these companies on Facebook. There were more than 1500 one-star ratings on the official Facebook page of BKK yesterday at 3 p.m., most of them also blaming the two companies for their unprofessional attitude in the added comments. At the time of writing (22nd July at 10 p.m) this number increased up to 44 000 one stars, while the official Facebook page of the German T-Systems received more than 5000 one stars (unfortunately they have nothing to do with the Hungarian company)! 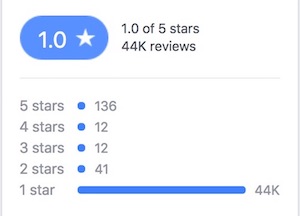 Probably real hackers were also enraged so they supposedly made the website of BKK unavailable for an extensive period of time by continuous (D)DoS attacks. Meanwhile, people started to create memes from the incident to mock and shame these companies. You can find a classic one below: 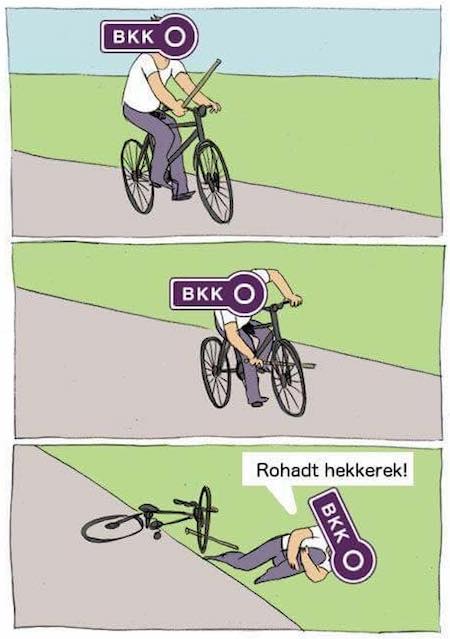 But my personal favourite is this one: 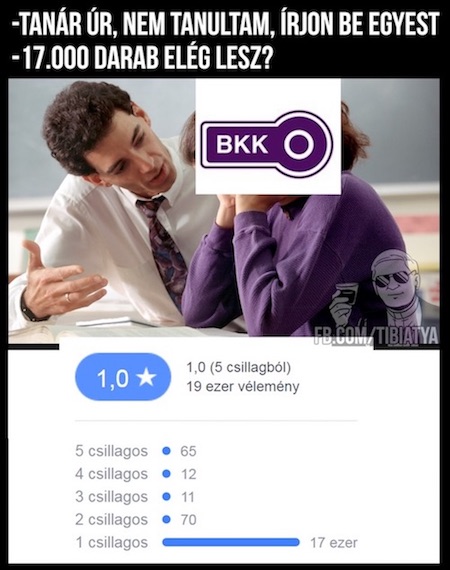 Background: the worst grade students can receive in Hungary is 1, while the best one is 5.

Mr. István Tarlós, City Mayor of Budapest was surely informed about the rebellion on the internet and he ordered the immediate investigation of the case. And you won’t believe what happened next! Mr. Kálmán Dabóczi, CEO of BKK publicly apologized about the problems around the new application and requested an incident report from T-Systems Hungary. It is even more ironic what Mr. Zoltán Kaszás, CEO of T-Systems Hungary wrote afterwards:

It is indisputable that there are more modern and more advanced solutions out there for certain components of the system.

As the leader of T-System Hungary, in case of his ethical behaviour gets proven, I would like to offer him the possibility to work together if he is open to it.

He also promised to set up a bug bounty program, like most of the better companies do.

Although the story isn’t finished yet, it is likely that it will have happy-ending: security holes in the application will be fixed, our young ethical hacker will get kind rewards (Green Fox Academy has already offered him scholarship), people responsible for his arrest will probably get some kind of prosecution, while BKK and T-Systems have already been suited on court because of misusing of personal data.

So what is to be learnt from the story?

First of all, never ever try to spare resources on fundamental security. It will cost much more money in the end if you screw up. In my opinion it is evident for lots of companies by now. The main problem I see however is that many organizations are usually uninterested in fixing long-standing unsecure code because they are either in a rush for money (thus preferring to develop new features), or don’t see much added value of fixing something “that has been working well for ages” or just have no idea what the problem is.

To be honest, I don’t believe T-Systems Hungary wanted to save a little bit of money on development. It’s much more likely that their developers were simply not aware of the “state of the art” in security practices, although there are so many great materials about the topic (please let me recommend my favourite sources for you: Troy Hunt’s, Scott Helme’s and the Paragon Initiative Enterprises’ blog).

This case also confirms my point of view that software development should be regulated as thorougly as other engineering professions. Our industry should set its standards to a much higher level in security, reliability and code quality than it currently does. It’s because with every passing day, our life is affected by software more and more. Fortunately, the progress our industry has been seeing in the last decades is really promising, but we still have a long way to go.

Another moral of the story is that if something goes really bad, be brave and take responsibility. This should be quite natural for everybody, but apparently there are some people who just can’t do it. The point is that if you screw up, you still have one very last chance: to stand up, be honest and apologize for your mistake.

People are usually very understanding because many of them can imagine themselves being in the same situation as you. Let’s take the case when a GitLab employee accidentally deleted their production database as a great example. This incident was also extremely embarrassing but they communicated everything so openly (they streamed the resolution on Twitter, wrote a very nice postmortem and tried to convince us that they do everything in order to prevent to commit this mistake again) so they actually gained the sympathy of people, and finally many of them said thank you to GitLab for being so open.

The last thing I’d like to highlight is the power of Facebook. It is really fascinating to experience that it is not only suitable for spreading “fake news”, but it can actually force people to back off from constant lying. I am certain that BKK and T-Systems would have never asked for apology if people hadn’t started war on the internet. Nevertheless it’s really sad that the fear from the online fury was their main motivator to admit the issues with their system.

You can read the full story here (unfortunately all the articles are in Hungarian).